I am sorry to burst your bubble but there isn’t a magic pill.

I am not going to lie to you; it takes hard work to get the results you want.

But, what if I told you there is an exercise that could contribute to all your goals.

I am going to warn you, this exercise has its own flu named after it.

Do you know what I am talking about yet? 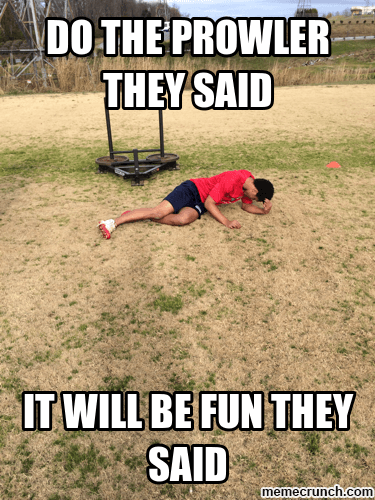 You can’t argue that its one of the best conditioning tools there is. Hence why there is a flu named after it.

But lets not forget the other benefits of this great piece of equipment.

You can use it to work on running mechanics, speed, and strength, in addition to conditioning.

A lot of times exercises get “Pigeon Holed” into stereotypes, for instance squats are only good for strength, kettlebells are only for fat loss, or in this case that the prowler is only for conditioning. But today, I am going to show you how to use the prowler in new ways.

As I said I like the prowler because it can help maintain proper positioning. Now, that we are using proper form we are able to work on getting faster.

To get faster you have to put more force into the ground. Force= Mass X Acceleration

This is where the prowler comes in; you can start adding weight and begin running with resistance. The heavier the weight is the more force you have to put into the ground. I think it is important to not get out of hand with the weight. The weight shouldn’t be too heavy causing you to be unable to maintain proper running mechanics and you should still be able to get full extension of the back leg. The combination of your improved running mechanics and are more forceful will make you faster.

Just like marching with the prowler it is important to do all speed training at the beginning of your workout so that you are learning in a non-fatigued state.

Building strength with the prowler is also a great option. Load it up and make it as heavy as you can and go, it’s like a one-legged standing leg press. This is great way to go heavy without have to load up a lot of weight on your spine. Pushing or even pulling a heavy sled is a great way to build some serious strength. Talk about force, you really have to drive that back leg through the floor.

I like doing these towards the end after your big movements. However if you are coming back from an injury and cant do squats yet or other quad dominant movements, this a great exercise without the stress on the body. If they’re in place of your big movements they can be placed in the beginning of your workout.

Another great way to use it when trying to build strength is pulling exercises, I love hand over hand rope pulls; this is a great exercise that really helps upper-body pulling and a great grip builder. It is also great for getting young kids stronger without them having to carry a big load. It is a great way for them to build strength and easy to maintain form.

When using it for conditioning I like to use it in an interval fashion. For instance, sprint with the prowler for 30-40 yards and then rest for a minute to a minute and a half. Repeat this for 5-10 sets. Make sure to rest between sets to give your body a chance to put more effort into each consecutive push.

I am also a big fan of using the low handles; this is just a great way to increase the difficulty.

As, I said before the prowler is great tool and has so many great benefits. It doesn’t just have to be used to make you feel like you want to puke. Use it for your sprint work, strength work, or upper body pulling and it will help you achieve great results.

Give it a try and let me know what you think. If you like this article please share it!!

This site uses Akismet to reduce spam. Learn how your comment data is processed.